Celtics players team up with fans to raise $105,000 for #SunLifeDunk4Diabetes in support of YMCA of Greater Boston's Diabetes Prevention Program

BOSTON and WELLESLEY, Mass., Dec. 5, 2019 /PRNewswire/ -- Sun Life and the Boston Celtics closed out the sixth-annual #SunLifeDunk4Diabetes campaign and presented $105,000 to the YMCA of Greater Boston for its Diabetes Prevention Program, a year-long nutrition and health course that helps at-risk adults avoid a diabetes diagnosis. Throughout November, which is Diabetes Awareness Month, each Celtics dunk earned a $1,000 donation from Sun Life, and $2,000 for Jaylen Brown's dunk on November 13 in recognition of World Diabetes Day. This November the Celtics tallied 49 dunks, led by Jayson Tatum with 14, followed by Daniel Theis and Robert Williams with 11 each. 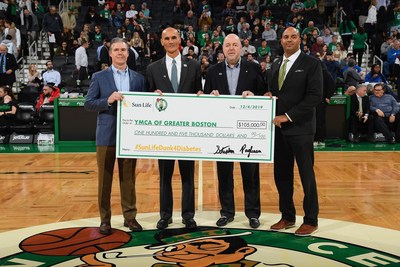 "We are extremely proud of the work we have been able to do in partnership with the Boston Celtics and the YMCA of Greater Boston," said Neil Haynes, CFO of Sun Life U.S. and board member of the YMCA of Greater Boston. "Sun Life's purpose includes helping people live healthier lives, and we want our community involvement to have the same goals. We are thrilled to be able to help more people in the Greater Boston community access the Y's Diabetes Prevention Program."

In addition to dunks from the players, Celtics fans rallied to support the campaign by engaging on social media and posting the hashtag #SunLifeDunk4Diabetes on Twitter, Instagram and Facebook more than 15,000 times, each earning a $1 donation for the campaign, and $2 during the November 13 game. The Celtics matched $25,000 for dunks, and Sun Life matched hashtags and social posts with another $15,000.

"We are so fortunate to have partnerships with Sun Life and the Celtics, who care about the Boston community and helping people achieve better health," said James Morton, CEO of the YMCA of Greater Boston. "Our programs and communities succeed when we have this kind of support, and we're thrilled to continue serving the citizens of Greater Boston."

"We have such incredible fans who not only cheer on our players, but engage so enthusiastically in our community programs," said Ted Dalton, senior vice president of Corporate Partnerships for the Boston Celtics. "Sun Life has been a great partner in moving these programs forward and finding ways for the fans to be involved and make a difference."

#SunLifeDunk4Diabetes has now raised $497,000 since it started in 2014. The campaign is part of Sun Life's broad and historical support of the YMCA's Diabetes Prevention Program, which Sun Life helped launch in Boston, Hartford, Conn., and Kansas City, Mo., in 2014. Since the program's launch, more than 65,000 people have participated at over 1,700 Ys across the country.

Sun Life is strongly committed to the fight against diabetes. In addition to community support in partnership with the Celtics, Sun Life conducts a similar program with the Kansas City Royals, and maintains a partnership with the American Diabetes Association to support education, advocacy and engagement initiatives. Sun Life also offers the Team Up Against Diabetes Grant Program, which funds grassroots organizations focused on diabetes education, management and support. To date, Sun Life has donated more than $19 million globally to support diabetes programs, and $2.5 million to programs focused on diabetes prevention in the U.S.

About the Boston Celtics
A charter member of the Basketball Association of America (which evolved into the National Basketball Association) since 1946, the Boston Celtics have won a record 17 NBA Championships, including eight (8) in a row from 1959-1966, winning their first title in 1957 and their most recent in 2008. The Celtics have long stood for equality and respect, including hiring the first African American Coach and starting the first all black starting five. In addition, 39 former Celtics players, management or staff have been inducted into the Naismith Memorial Basketball Hall of Fame. In December 2002 the team returned to local ownership for the first time since 1963. For more information, log on to www.celtics.com.

About the YMCA of Greater Boston
The YMCA of Greater Boston is one of Massachusetts leading nonprofits committed to strengthening communities by improving health, empowering youth and activating people for good. Every day the Y works with thousands of men, women, and children to ensure that everyone, regardless of age, income or background, has access to Y programs and services.   As the nation's fifth largest charity, the Y is creating a community of caring people through meaningful memberships. For more than 165 years, the Y has been developing skills and emotional well-being through education and training, welcoming and connecting diverse populations, preventing chronic disease and building healthier communities. The YMCA of Greater Boston is America's first Y.